My Life As… Series

A book series written by Janet Tashjian and illustrated by me. The series focuses on teaching kids with reading disabilities different vocabulary words in a fun and entertaining way!

Summer’s finally here, and Derek Fallon is looking forward to pelting the UPS truck with water balloons, climbing onto the garage roof, and conducting silly investigations. But when his parents decide to send him to Learning Camp, Derek’s dreams of fun come to an end. Ever since he’s been labeled a “reluctant reader,” his mom has pushed him to read “real” books-something other than his beloved Calvin & Hobbes.
As Derek forges unexpected friendships and uncovers a family secret involving himself (in diapers! no less), he realizes that adventures and surprises are around the corner, complete with curve balls. My Life as a Book is a 2011 Bank Street – Best Children’s Book of the Year.

Book 2: My Life as a Stuntboy 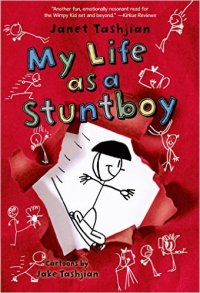 Derek Fallon gets the opportunity of a lifetime―to be a stunt boy in a major movie featuring a pretty teen starlet. After accepting the job he learns that he is the star’s stunt double and must wear a wig! His friends are never going to let him live this down. If that weren’t his only problem, his parents are threatening to give away his pet monkey, and his best friend just posted an embarrassing video of him on Youtube. Can life get any worse? Still the irrepressible Derek takes it all in stride and even manages to save the day.

Book 3: My Life as a Cartoonist

There’s a new kid in Derek Fallon’s class. His name is Umberto and he uses a wheelchair. Derek’s family is still fostering Frank the monkey, and Derek thinks it would be great to train Frank to assist Umberto. But Derek quickly realizes that Umberto is definitely not looking for any help. Derek soon becomes the butt of Umberto’s jokes. On top of that, Umberto starts stealing Derek’s cartoon ideas and claiming them as his own. How did Derek get himself into this mess, and how can he find a way out before he is the laughingstock of school? The answer may very well be his cartoon strip―SUPER FRANK!

Derek Fallon discovers all the angst that comes with being twelve―he just wants to feel grown up, but life gets in the way with a series of mishaps that make him look like a baby. He passes out during a worm dissection in science class, falls flat on his face in gym class and gets a fat lip that causes him to lisp all day, and his plans for a monster-truck party turn into a bouncy house disaster. Why isn’t being in middle school as great as Derek imagined? Thankfully, with a little help from his friends―and, ironically, a Toys for Tots fundraiser―things seem like they could start shaping up at last.

Derek Fallon gets the chance of a lifetime―to participate in a gaming company focus group and to test out a new video game called “Arctic Ninja.” Together with his friends Carly, Matt, and Umberto, Derek thinks his gaming talents will be showcased. But he soon realizes that everyone has got him beat, including whiz kid El Cid. On top of that, school reading tests have begun and Derek feels doubly off his game. Isn’t there anything he’s good at?